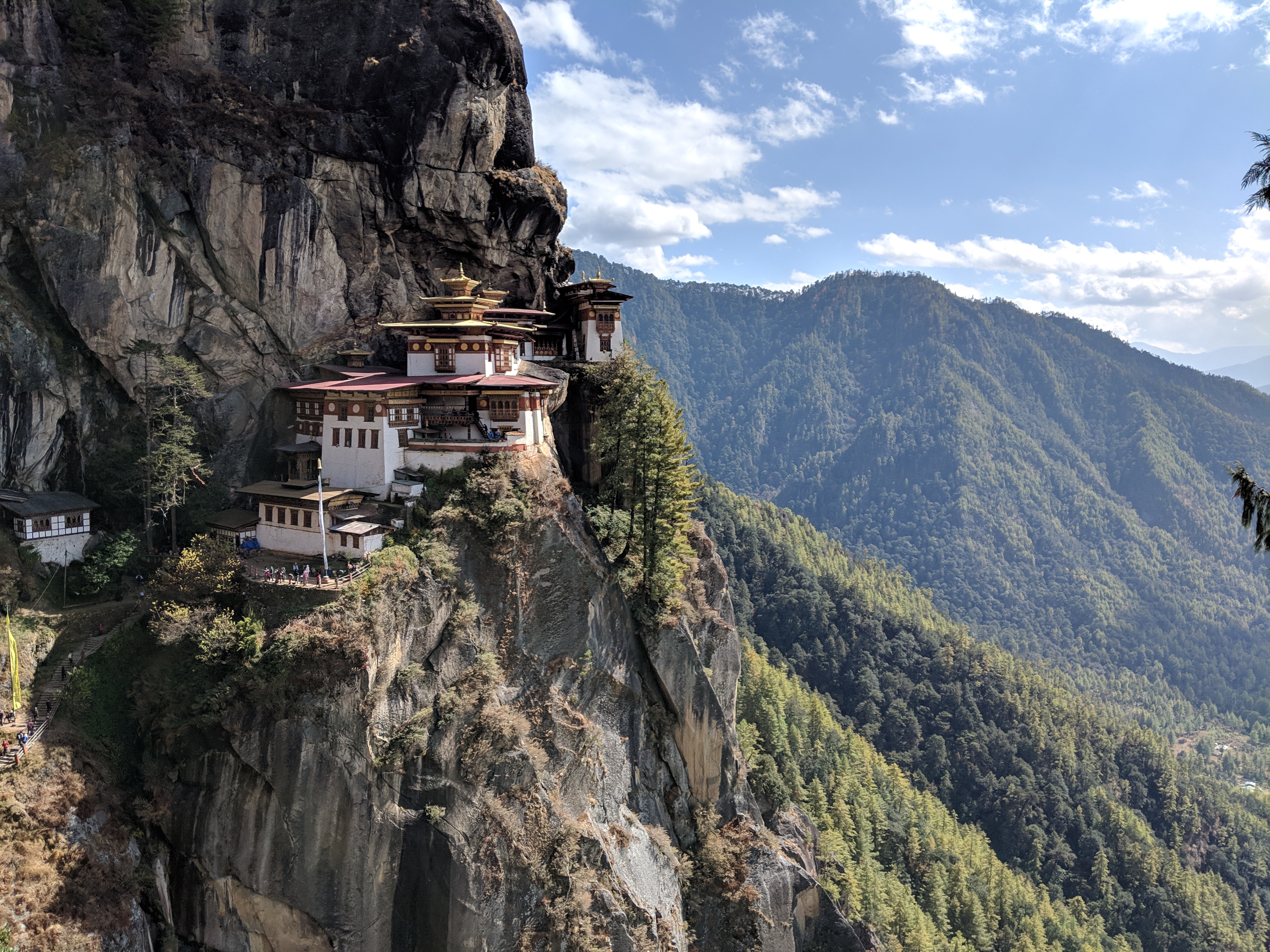 Everyone has their own reason to travel to Bhutan.

My trip was driven by timing, more than anything else: I wanted to go trekking in that part of the world, and the G Adventures trip fit my schedule.

Others were more interesting, though. One woman in my group had dreamed of going since she was five, and got the trip as a present from her kids. Another was a European diplomat based in India, who wanted to go somewhere that was cold and offered a break from the smog. One was a corporate lawyer on gardening leave, and came because his friends dared him.

We all had different reasons, but we were all drawn on some level by those same few facts that always get repeated about Bhutan:

Because I'm a sucker for seeing trivia pan out in real life, I ended up spending slightly under two weeks tromping around a few valleys in a country roughly twice the size of Wales.

So, what do you do in Bhutan? You walk.

I went for the Druk Path. 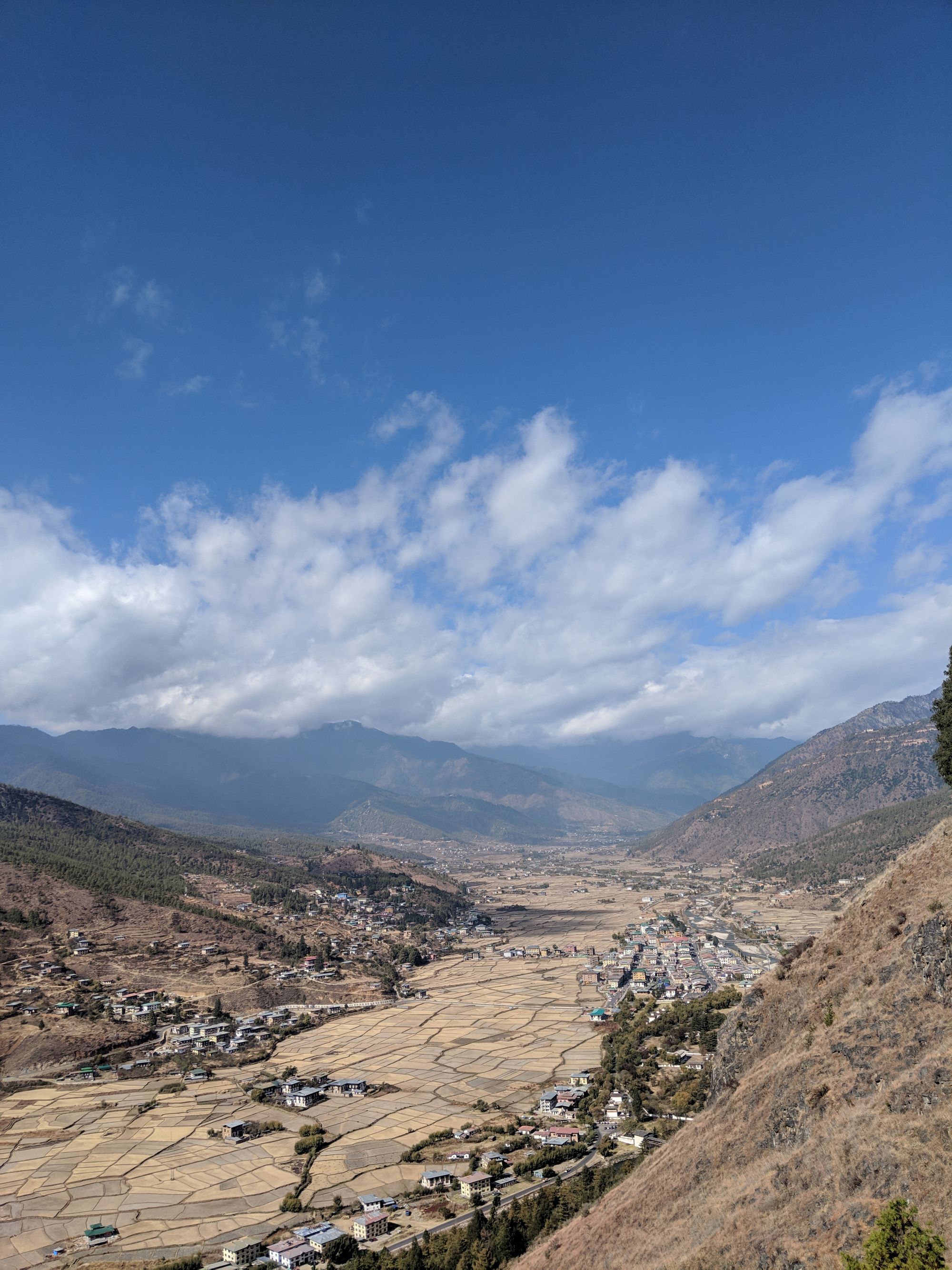 The Druk Path isn't what you think of as a trail in the Western sense. It's not formally marked, nor is it run by a particular agency, nor does it have a nice map. Broadly hiking the Druk Path is walking the route that people used to use to get between Paro and Thimpu, and using common campsites. This means that different tour companies will have different routes and different lengths.

The particular trek I took did the route in six days, which is about as leisurely as one could get. We'd start walking around 9am and be in camp by 4pm, after stopping for lunch for an hour and for regular tea breaks. While that'd be listed as seven hours of walking on an itinerary, it's really around four and a half hours of feet-moving time spread over seven hours. Based on my trip, a five-day route would be nice for someone of average fitness, and a four-day route would be very doable for someone used to hiking. The whole route is ~55Km, and Bhutanese have been known to do it in a day.

The route I took was Paro → Jele Dzong → Jangchulakha → Jimilangtsho → Simkotra → Phajoding → Thimpu. Of those days, only the third one (Jangchulakha to Jimilangtsho) was challenging - but the guide explained that if we were doing the trek in fewer days, he'd have taken a shorter route between the two areas, and ended the day one campsite further along.

In comparison, G Adventures trips for next year will go Paro → Jele Dzong → Jimilangtsho → Simkotra → Thimpu. Assuming they take the shorter route from Jele Dzong to Jimilangtsho, this seems aggressive but doable by someone of average fitness. Their overview makes a big deal out of the length of the Simkotra to Thimpu day, but it's nothing to be afraid of; leaving Simkotra at 9am, we arrived at Phajoding by 2pm, and the Thimpu pick-up point is only a few hours down a hill from there.

If you're coming from Nepal, the Druk Path will seem pleasantly depopulated. Only about 1200 people do it per year (which breaks out to around fifteen groups per month), and the odds are good of being alone out there on the trek. There was one other group doing it at the same time as I was, and our groups would only run into one another maybe once per day. 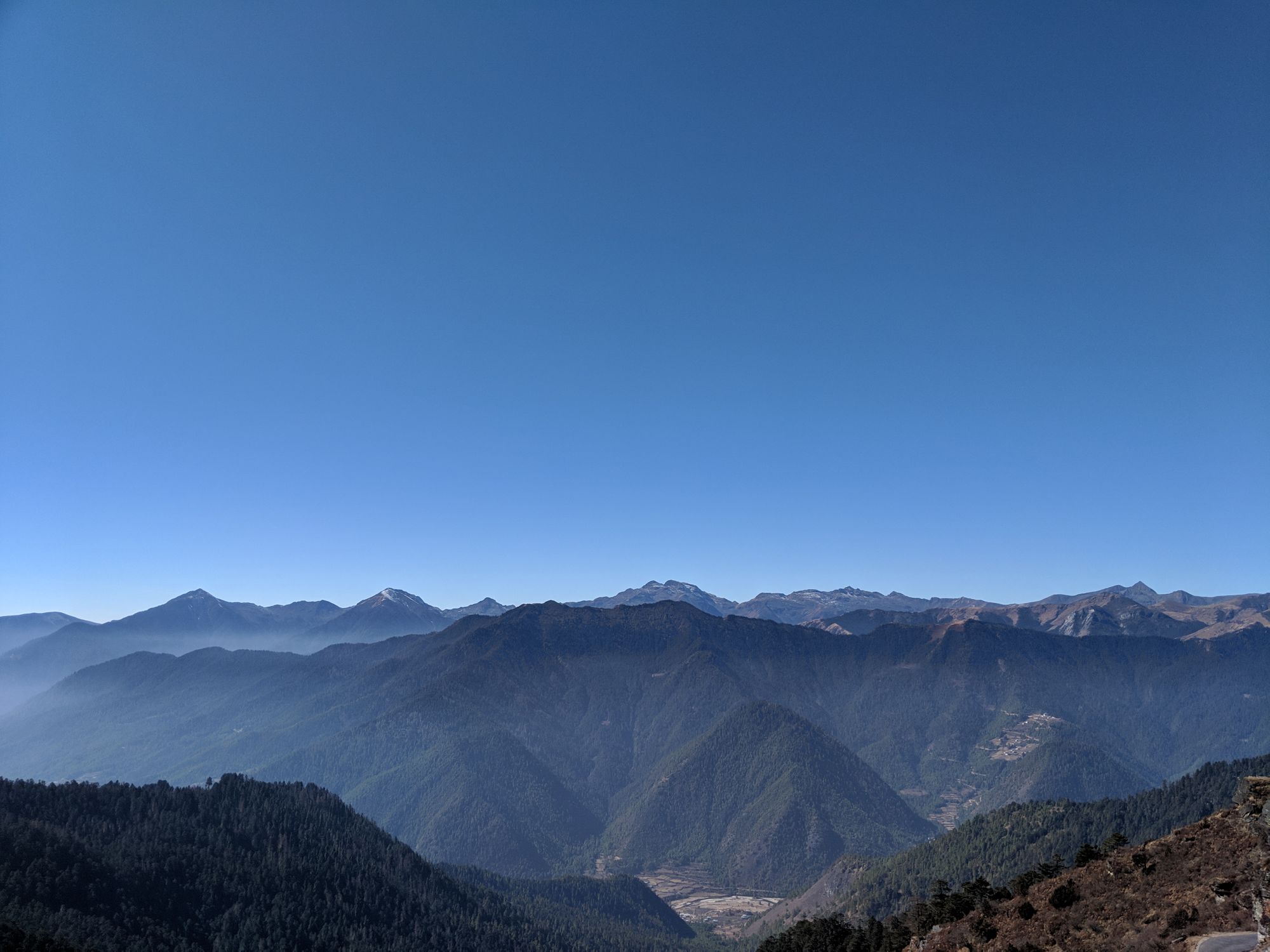 I did the trek in mid-November, which is the end of the tourist season and the start of winter.

In Paro & Thimpu, the days were around 12 °C, going down to 5-7 °C in the evenings - so not especially cold, but definitely crisp and needing a jacket.

On the trek itself, there are two temperatures: in the sun, and out of the sun.

When in the sun (starting an hour or so after wake-up, lasting until about 4pm), it was glorious. Pure, unfiltered, high-altitude sunshine, and 10 °C. For me, that meant hiking pants, a base thermal layer, and a light zip-up fleece. I kept a down jacket in my day-pack, but only wore before I warmed up or when stopping for lunch.

When not in the sun, it was cold. Within half an hour of losing the sun (which always happened after reaching camp) the temperature would drop to around 3 °C, and I'd add a windbreaker, toque, better gloves, and put on a layer of thermal long-underwear. Even with that on, huddling around the fire was key to staying comfortable.

Overnight, it would go down to -15 °C or so. Water bottles left outside the tent would freeze, batteries would wear down, and mornings would find the inside of the tent covered with a layer of ice from my breathing. I had a -18 °C sleeping bag, and was warm enough if I slept in my thermal long-underwear. If you're going this late in the season, I wouldn't bring a lighter bag.

Luckily, there was no rain while on my trek (although there was some light snow late at night) - but I can see how it'd be cold and miserable if there was. 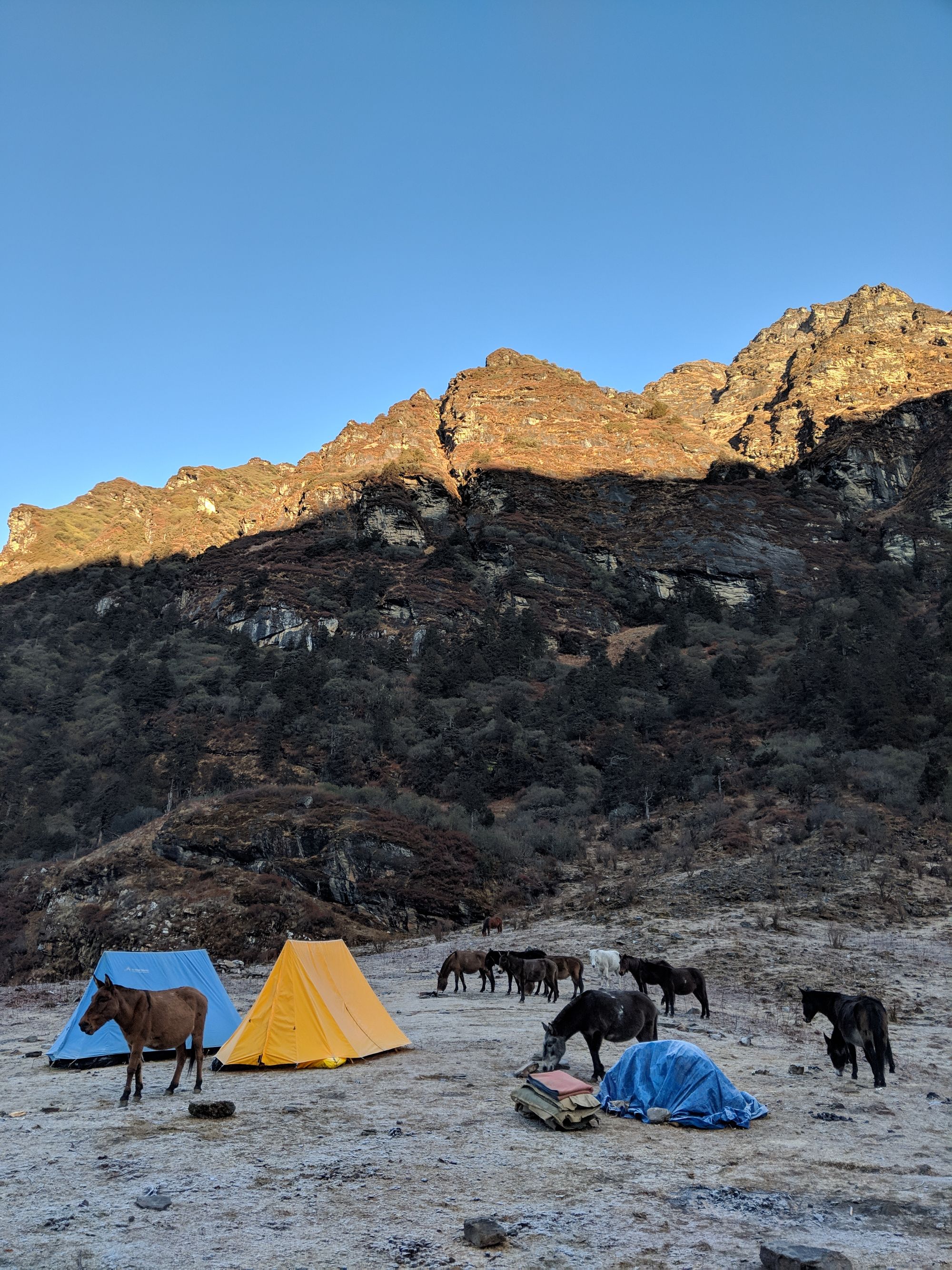 There are a bunch of packing lists out there, but it ultimately comes down to the amount of warm gear you'd like to bring, and how many times you'd like to re-wear the same base layers and socks. The usual hiking advice about layering strongly applies here, and it's worth planning which pieces of clothing you'll carry in your day pack versus which you'll leave on the horses, to be seen again when you arrive at camp each day.

Aside from that, the technical essentials are a pair of hiking boots or trekking shoes, a day pack, a few water bottles, a head lamp, a rain jacket and pants, and a warm sleeping bag. Unless you have balance or knee worries, I wouldn't bother with trekking poles; the only spot they'd be useful is a few hours going down hill on the last day.

Sadly, there isn't anywhere in Paro to rent gear - while it's 100% a tourist town, there isn't the traffic for rentals as Bhutan isn't a place you short-notice drop in to. If you're doing the trek in the middle of a larger trip and don't want to carry a sleeping bag everywhere, fly via Kathmandu and rent your gear there. 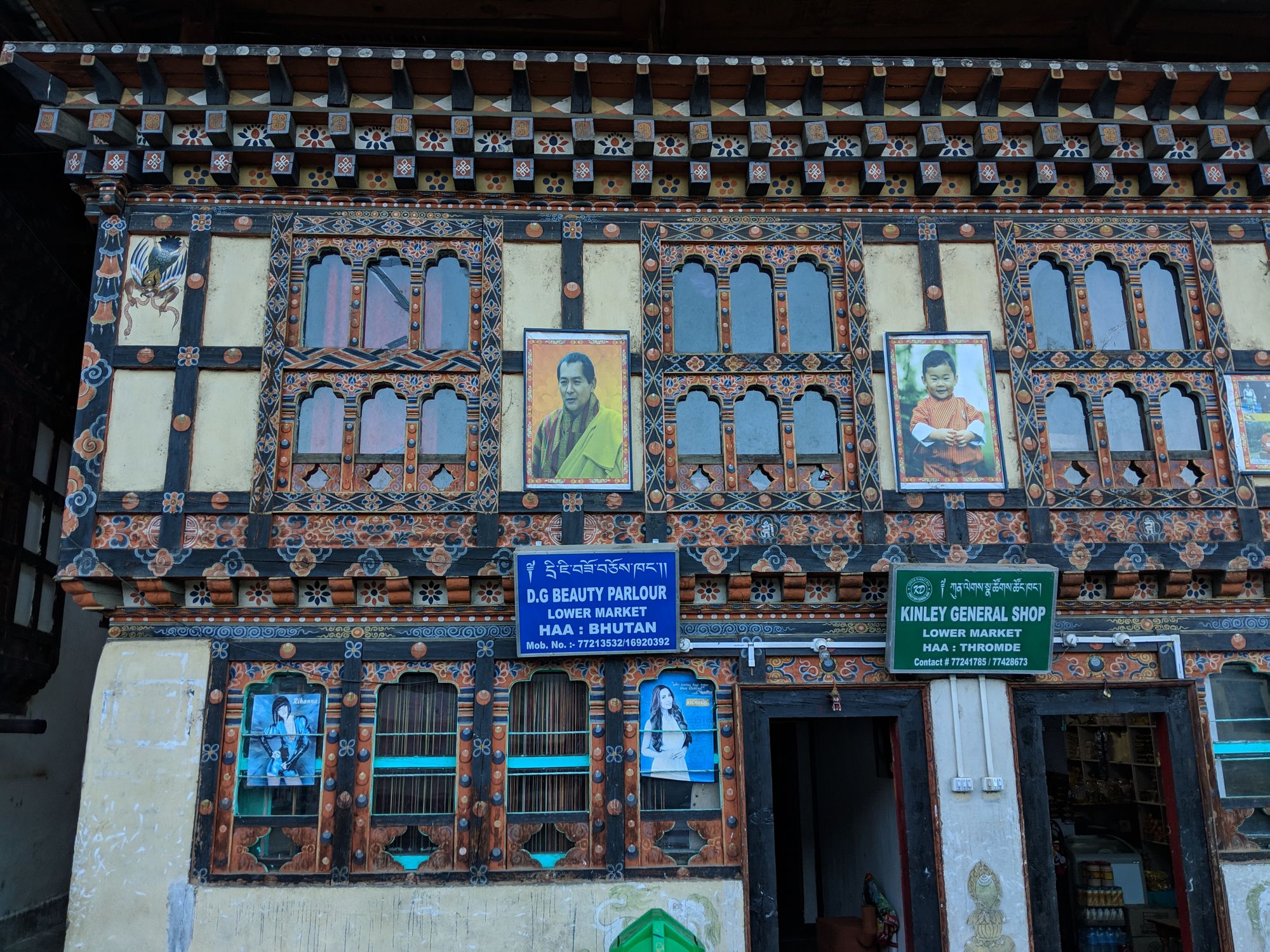 If you're coming back to Paro after your trek, the Tiger's Nest Monastery is one of, if not the, biggest tourist sites in Bhutan. First built in the 1600s, it was mostly rebuilt in 1988 due to a fire. On one hand, it's a spectacular view, and the most recognizable thing in Bhutan. On the other, it's full of SAADC tourists, and while it remains a working monastery, the whole rebuilt-in-1988 thing makes it feel a little fake. On balance, though, it remains a must-visit.

The round-trip hike is about seven kilometers, and there's no driving option (although you can rent a horse for portions of the climb). All-in, budget three hours to trek up, an hour or so at the monastery, and then an hour to trek down. The route is mostly wide dirt paths, with half an hour of rock stairs at the final pitch. I wore my full hiking gear, but you'll see many people do it in jeans and trainers.

Hiking around the Chelelea Pass was one of the highlights of my trip. You'll see thousands of prayer flags, but the reason you're up there is views of the Paro & Haa valleys and of Mt. Jhomolhari. You'll also get a nice view of the route the Druk Path takes, and you can see the ridges you spent the first few days walking over.

There isn't much there there on arrival, aside from a truck selling porridge. Park your car and starting walking up, and go until there isn't any further up. If you go all the way to the end of the ridgeline, it's three or four hours' (return) walk - but you can turn around at any point, and past an hour's walk outbound the views are similar. Bring water, and wear jeans and trainers. To get there, the drive from Paro to the base of the pass is about 90 minutes of forested switchbacks. On your way home, don't bother driving down into the Haa Valley - the Indian military base and the one Dzong aren't worth it.

Another option is to extend your stay in central Bhutan and head to Punakha. I haven't been, but I'm told it has some beautiful hikes and Dzongs. 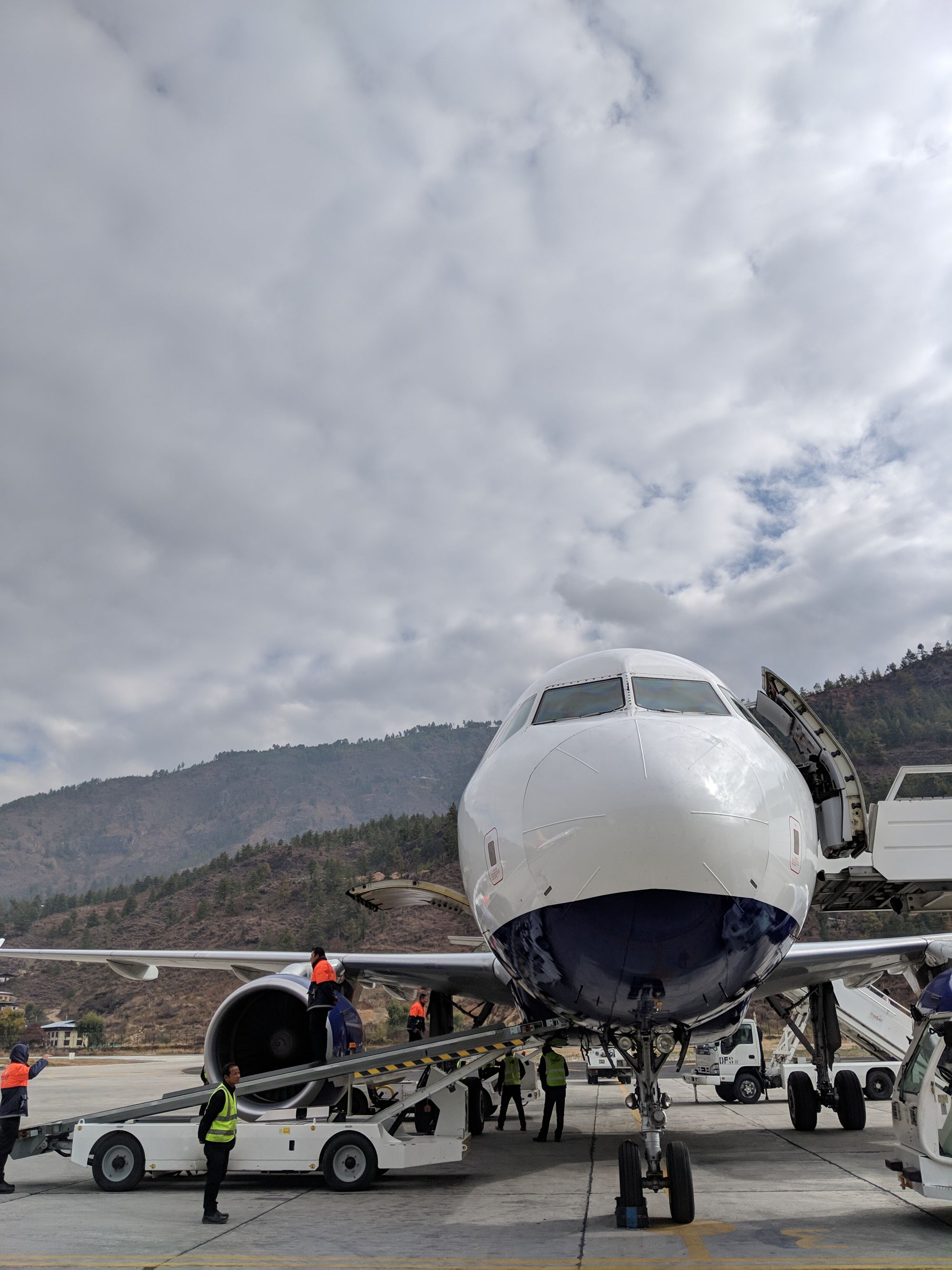 Having been once, would I go back? Probably not.

I enjoyed my time there greatly, but if I'm taking the time and flights to go trekking in the Himalayas, I'll go somewhere else - new culture, new views, new passport stamp. It's a place worth visiting once, but probably not a second time.

Flights to Bhutan are available on Drukair and Bhutan Airlines - which may be different brands of the same company - from Bangkok, Singapore, Kathmandu, and major Indian cities.